After the fun I had with the last few posts on basic graph algorithms, this week we’ll implement a generic A* search algorithm in Racket.

A* Search uses a best-first search through a graph to find the least-cost path from an initial node to one goal node. It is based on an optimistic heuristic of the cost from each node to the goal. A common heuristic is something like Euclidean distance when the nodes represent a plane.

Our first step will be to specify the interface between the search algorithm and the graph. Nodes must have a way of enumerating their edges. Edges must have a source, cost, and destination:

We can’t express this in the interface, but nodes must be comparable with equal?.

Each search on a class of graphs will be further parameterized by a node-cost function that will return the estimate of the cost from the given node to the goal and an initial node.

As a basic instance of this problem, we’ll take an NxN grid where a random sample of cells are given the characteristic: plains (0), woods (1), or mountains (2).

We will represent nodes in the search space as XY-coordinates and edges as displacements in a particular map.

We will compute the edges in an obvious way, with no diagonal movement:

When we make a search query, we’ll have to additionally specify the initial node and the cost estimate. For our estimate, we’ll use the Manhattan distance (because we know we cannot move in diagonals) to the goal X and the goal Y:

The overall structure of the function will be:

After opening up the unit to get access to the function, we’ll set up the data structures, run in a loop for some time (potentially returning to esc on success), before otherwise failing, and printing a statistic in any case.

The algorithm revolves around two data-structures: the closed set and the open set.

The closed set represents the nodes that we have visited and is a pair of hash tables storing their best path (stored in reverse) and its cost.

We assume that we have implict access to the initial node and, thus the cost to it is zero.

The open set represents the nodes that we must visit and is stored as a priority queue where the priority of node n is the cost of the best path to n plus the estimated cost from n to the destination.

We start with only the initial node in the open set.

The core of the algorithm is a loop that visits each node added to the open set.

Every time we visit a node, we check if it is the goal, by checking if the heuristic says the cost to get to the goal is 0. If that’s the case, then we return the path (after reversing it so it is from the source to the goal and not the goal to the source.)

Otherwise, we need to visit each of the current node’s neighbors.

At each neighbor, we need to consider two things. First, whether it needs to be added to the open set. And second, if not, whether we have discovered a better path to it. Since in both cases, we’re going to be updating the closed set, we do a bit of a hack and consider the best path to nodes in the open set to cost +inf.0:

This concludes the algorithm. When we run it on the example, the path is almost always 18 edges long and is computer in under a second, even if we have to visit every node. In contrast, I find that with a 50x50 map, it takes about 16 seconds and most paths are 100 edges long.

Although our algorithm gives us paths just fine, it is a little difficult to appreciate them without some way of visualizing them.

First, we’ll draw the map as a grid of squares. Yellow squares will indicate plains. Green for woods. And, red for mountains. 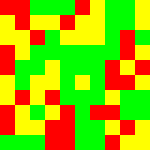 Next, we need a way to add a line for each edge in the path:

We’ll iteratively do this to every edge in the path to get the complete path: 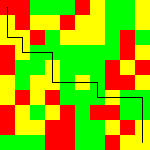